Elena Jane "Ellie" Goulding (born 30 December 1986) is an English actress, singer-songwriter and multi-instrumentalist. Born in Hereford, Herefordshire, her career began when she met record producer Starsmith and Frankmusik. She was later spotted by Jamie Lillywhite, who became her manager and A&R. Goulding signed to Polydor Records in 2009, in which she released her first EP in 2009, An Introduction to Ellie Goulding.

In 2010, she became the second artist to both top the BBC's annual Sound of... poll and win the Critics' Choice Award at the 2010 BRIT Awards in the same year, following Adele's win of both in 2008. Goulding released her debut studio album, Lights, in 2010. The album debuted at number one on the UK Albums Chart and has sold over 850,000 copies in the UK. Her cover of Elton John's "Your Song" reached number two in the UK in December 2010 and on 29 April 2011 she performed the song at the wedding reception of Prince William and Catherine Middleton at Buckingham Palace. The album's title track, "Lights", was released in the US in March 2011, and peaked at number two on the Billboard Hot 100 nearly a year and a half later during its thirty-third week charting, completing one of the longest ever climbs into the top two positions on the chart. The single, which lasted over a year on the Billboard Hot 100, was also certified triple platinum by the Recording Industry Association of America (RIAA).[1][2]

Goulding's second album Halcyon was released in October 2012 to generally positive reviews from critics.[3] "Anything Could Happen" preceded the album as the lead single, reaching the top five in the UK as well as the top twenty in Australia, Ireland and New Zealand. Halcyon debuted at number two on the UK Albums Chart, and, after 65 weeks, reached number one. Halcyon debuted at number nine on the Billboard 200 Chart, her first top ten debut in the United States. The album also reached the top five in New Zealand, top ten in Ireland and Canada, and top twenty in Australia.

Halcyon Days, a repackaged edition of Halcyon, was released on 23 August 2013, it included new singles including "Burn", which became her first UK number-one single in the same month, as well as "I Need Your Love" with Calvin Harris and "How Long Will I Love You". At the 2014 BRIT Awards she received the award for Best British Female.[4]

"I think sometimes it sounds like my voice is like, out of control... I have to really control it because it just kind of goes everywhere. Like, sometimes stuff comes out that I don't expect. A lot, actually [...]. It's so funny because my favorite thing to do is imitate opera singers, but I've never had a singing lesson. Oh, I had a lesson just to teach me how to breathe better, but I never really had a singing lesson."

—Goulding describing her voice in an interview with Carson Daly.[75]

Goulding possesses the vocal range of a soprano[76][77][78] and is noted for her high piercing vibrato, breathy tone and emotive delivery.[79][80] In a review for Halcyon, Neil McComick of The Daily Telegraph described her voice as "something special", continuing; "Her tremulous vibrato and slightly hoarse timbre have the feel of something primal and folky, her birdlike high notes conveying a childlike wonder while darker tones imply ancient depths of sorrow. She sings like she is strung out on the melody, warbling from a place of desperate emotion. It really is that rarest and perhaps most accidental of gifts: an original voice". He then continued in regards to her vocal layering stating, "producer Jim Eliot puts her voice front, back and centre, banking up choral walls of vibrato, fashioning hooks from cut up samples of chirrups and chants, and creating unusual textures from trills and warbles".[81] Will Hermes of Rolling Stone compared her voice to that of Dolly Parton, stating that her upper register was dazzling whilst also complimenting her skill in vocal multi layering.[82] Megan Farokhmanesh of Paste magazine stated "Goulding has a lovely voice, but occasionally her soprano-strung vocals hit a note that rubs the eardrums the wrong way" although she praised Goulding overall for her "talent for gorgeous high heart-tugging vocals".[78]

Goulding's debut album Lights (2010) experimented with genres including indie pop, synthpop, folktronica and indietronica. The album contained "sparkling pop with a folky heart and an electronic edge" and was noted as being infectious.[83] The album incorporated "acoustic guitar" and "retro-synthpop" compared to that of Little Boots and La Roux, while the production contained "folkie origins under a welter of busily cycling synths and programmed beats". Goulding's second album Halcyon followed in the same vein, including genres such as indie pop, synthpop and dream pop. She stepped away from the electronic sound of her previous album and moved to a more tribal and anthemic sound containing a bit more piano and vocal.[84]

Goulding states that she is influenced by a wide range of genres from R&B, electronica, heavy metal, folk, hip hop, pop and classical. She listed Beyoncé, Ani DiFranco, Imogen Heap, Björk, Joni Mitchell and Lauryn Hill as influences, as well as contemporaries such as Florence and the Machine, Marina Diamandis, Katy Perry, Lana Del Rey, Lady Gaga, Rihanna and Owl City, stating that she is "blown away" by them. She also expressed admiration for rappers Kanye West, Drake and Nicki Minaj.[85] Goulding's musical style has been compared to that of Kate Nash, Meiko, Lykke Li and Tracey Thorn.[86] 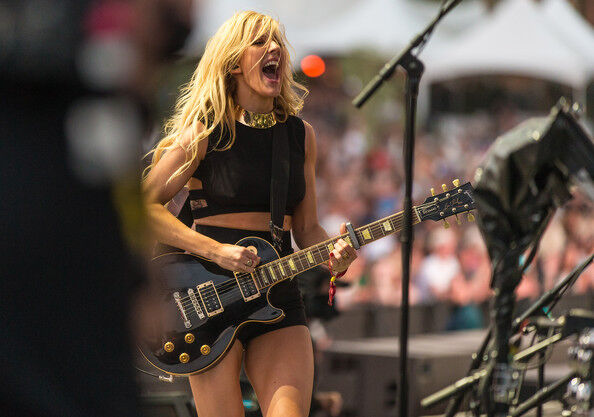 On January 7, 2015, Goulding released the single "Love Me Like You Do" for the soundtrack of the 2015 film adaption of "Fifty Shades of Grey". The track received acclaim and topped charts internationally; giving Goulding her second #1 single in the United Kingdom and garnered Grammy and Golden Globe nominations. Throughout 2015, Goulding worked on her then-upcoming third studio album. On September 17, she released lead single "On My Mind" and announced her third studio album; Delirium, which was released on November 6. The songs "Army" and "Something In The Way You Move" were issued as singles on January 9 and 19 respectively. On August 19, 2016, Goulding released the single "Still Falling For You" for the film "Bridget Jones's Baby", which was a moderate success.

Goulding embarked on the Delirium World Tour beginning January 21, 2016 and mainly concluded in October 2016, however extended the tour during festival appearances during 2017. In April 2017, Goulding released a collaboration with Kygo titled "First Time".

Goulding stated that she would be taking a break during the majority of 2017, however later announced that work on her fourth studio album had commenced.

In February 2018, Goulding released her cover of Don McClean's "[[" on streaming platforms. On October 24, Goulding returned with her new single "Close To Me", featuring Diplo and Swae Lee; later releasing a remix with K-pop group Red Velvet on April 5, 2019.

On March 1, 2019, Goulding released the single "Flux", which she stated was a 'taste' of her then-upcoming album's material, as well as describing the song as "completely from the heart." A music video was made for the single. Throughout 2019, Goulding then released the songs "Sixteen", "Hate Me" (featuring Juice WRLD) and a cover of "River" by Joni Mitchell exclusively on Amazon Music. "River" became Goulding's third #1 single on the UK Single Charts and the final chart-topper of the 2010s. In January 2020, Goulding announced that her fourth album would be released in 2020. The following month, she then released the song "Worry About Me" featuring blackbear.

On 21 May 2020, she released the single "Power", the lead single from the album. On 27 May 2020, she officially announced her fourth studio album "Brightest Blue", which was released on 17 July. The song "Love I'm Given" was issued as a single and had a music video released the following month.

Goulding opted to split "Brightest Blue" into two sides, the second being titled "EG.0" (a play on the word "ego" and Goulding's initials) and placed "Close to Me", "Sixteen" (on digital platforms only), "Hate Me" and "Worry About Me" on the second along with an overture and a collaboration with Lauv titled "Slow Grenade". The latter was released as a promotional single on 30 June. The Red Velvet remix of "Close to Me" was included on the Japanese edition CD.

Goulding is a keen runner, aiming to run six miles every day and in 2010 announced plans to run a marathon.[50] In support of her second EP, Run into the Light, she invited a small number of fans through her Facebook pages to run with her in seven different cities on her UK tour,[38] and has announced that she will be doing the same across Europe and the United States. Goulding ran the inaugural Nike Women Half Marathon in Washington, D.C. on 28 April 2013, earning a time of 1:41:35.[87][88]

Goulding is close friends with American folk singer Lissie. The two toured the United Kingdom together in 2010.[89][90] She is also good friends with New Zealand indie pop singer Lorde,[91] American pop singer Katy Perry[92] and British Formula One driver Lewis Hamilton.[93][94] Goulding dated Greg James from 2009 to 2011, and has admitted that the relationship inspired several songs on her second album Halcyon.[95] She dated Skrillex in 2012,[96] From May 2014 to 2016, she was in a relationship with McFly band member Dougie Poynter[97].

Goulding started a relationship with Caspar Jopling starting March 2017. On 7 August 2018, Goulding and Jopling announced their engagement. They got married on August 31, 2019 at York Minster. Prior to getting married, Goulding was baptised in line with Jopling's family's religious beliefs. 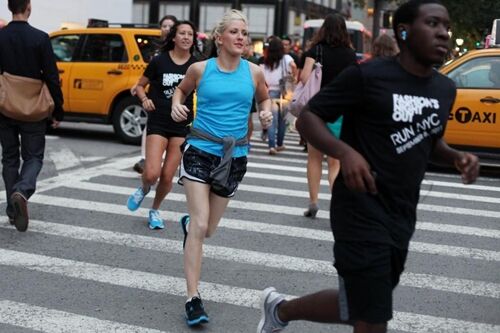 Ellie running the inaugural Nike Women Half Marathon in Washington, D.C. on 28 April 2013.

In 2010, Goulding participated in the Bupa Great North Run for the British Heart Foundation.[98] In 2011, Goulding ran the She Runs LA event for charity Students Run LA, which aims to increase access to sport for less privileged children across the Los Angeles Unified School District.[99]

In 2012, she partnered with Pandora Radio; one dollar for each sale of her mixtape was donated to Free the Children charity.[100][101]

On 1 June 2013, Goulding performed at Gucci's global concert event in London whose campaign "Chime for Change" aims to raise awareness of women's issues in terms of education, health and justice.[102]

On 15 November 2014, Goulding joined the charity group Band Aid 30 along with other British and Irish pop acts, recording the latest version of the track "Do They Know It's Christmas?" at Sarm West Studios in Notting Hill, London, to raise money for the 2014 Ebola crisis in Western Africa.[103]

In 2020, Goulding was featured on the BBC Radio 1 charity single "Times Like These", also performing the acoustic guitar in the song. 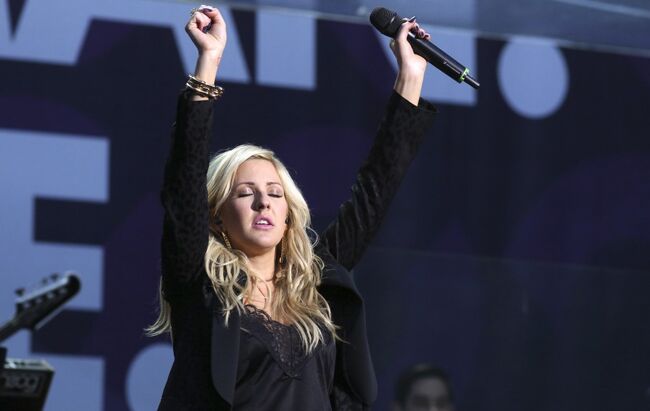 Ellie performing at the 'Chime for Change' event.